My wife and I decided pet insurance was worth investigating when we adopted Muppy in 2013. We had several unplanned vet bills with previous pets requiring emergency surgery or because they were treated for chronic issues for many years. So when we adopted Boomer (the cat) that fall, we also purchased a policy for him. Nine years later, I believe it was a wise investment. 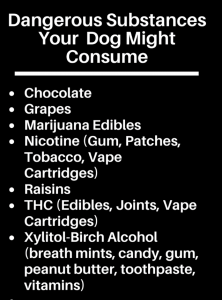 There are things we might consume which can be deadly to our dogs ©Donald J. Hanson

In the fall of 2020, I started talking about pet health insurance with students in my Puppy Headstart-ONLINE class. It follows the module where we discuss chewing and dogs consuming inappropriate and dangerous items. I show my students images from veterinarians of some of the scary things dogs have ingested.  A partial list includes: coins, toys, spoons, forks, a fish hook, a segment of a fishing pole, batteries, socks, tennis balls, 4lbs of gravel, and even an 8-in kitchen knife! A veterinarian even told me about a dog that had swallowed a woman’s brassiere. Unfortunately, a dog consuming items like these is not unusual; just ask your veterinarian.

I discuss pet insurance with my puppy students because this is the time in a dog’s life when they put anything and everything in their mouths. However, I also bring it up before their puppy swallows something dangerous because if they try to purchase pet insurance after the fact, the future ingestion of inappropriate items will likely be excluded from coverage. Unlike human health insurance, pet insurance typically does not cover pre-existing conditions.

Items That Can Be Deadly to Dogs 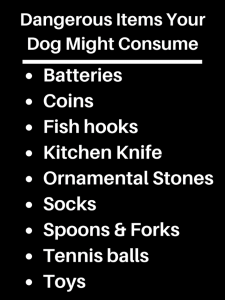 The probability of consuming dangerous things does not end after puppyhood ©Donald J. Hanson

In addition to worrying about swallowing hard goods, there are many other items a dog can consume that can be deadly. These include tobacco and marijuana-based products.

Products designed to help one quit smoking, such as patches and chewing gum, contain enough nicotine, even after discarding them, to be toxic to dogs. The same is true of vaping products containing nicotine or THC.

Then there are the things we might consume, which can also be deadly to our dogs. A partial list includes: marijuana edibles, grapes, raisins, chocolate, and anything containing the artificial sweetener Xylitol (birch alcohol). A partial list of products with Xylitol includes: sugar-free candy and gum, breath mints, toothpaste, children’s vitamins, ready-to-go pudding, and even some peanut butter brands.

I cannot emphasize enough that the probability of consuming dangerous things does not end after puppyhood or will happen only once. I know of a dog that recently ate a bag of chocolate chips resulting in a vet bill approaching $2000. I have a client whose dog swallowed a sock on six occasions, requiring surgery. I know two people who had dogs that got into gum containing Xylitol. One dog survived after a three-day stay in the doggie equivalent of an ICU. One dog died. One of those images I mentioned above was of a dog with 44 socks in his stomach.

So Why Pet Insurance?

Simply because any of the abovementioned incidents could result in a costly bill. Also, it is not just the ingestion of items that can cause an unplanned vet bill. Like us, dogs are subject to trauma, orthopedic issues, heat stroke, and tick-borne diseases.

Additionally, there are many chronic diseases to consider: skin disorders, ear infections, urinary blockages, seizures, behavior disorders, diabetes, renal disease, and cancer. Pet insurance can help with all these expenses if you have it in place before it occurs. 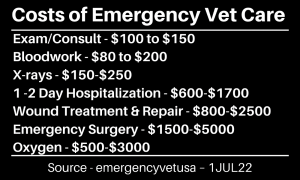 We decided to purchase pet insurance for Muppy because of a previous dog who had seizures for seven years of his life and another that had two immune system disorders. The treatment cost for both was significant. In addition, we purchased it for our cat Boomer because we had previous male cats who experienced a blocked urethra which can be deadly and is not inexpensive.

The policy we chose does not cover annual wellness exams, but we are covered in the case of the unexpected. I believe it has more than paid for itself in dollars and peace of mind. 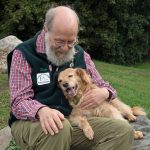 Don Hanson lives in Bangor, Maine, where he is the co-owner of the Green Acres Kennel Shop and the founder of ForceFreePets.com, an online educational resource for people with dogs and cats. He is a Professional Canine Behavior Consultant (PCBC-A) accredited by the Pet Professional Accreditation Board (PPAB) and a Bach Foundation Registered Animal Practitioner (BFRAP). Don is a member of the Pet Professional Guild (PPG), serving on the Board of Directors and Steering Committee and chairing the Advocacy Committee. He is also a founding director of Pet Advocacy International (PIAI). In addition, Don produces and co-hosts The Woof Meow Show podcast, available at http://bit.ly/WfMwPodcasts/, the Apple Podcast app, and Don’s blog.

The opinions in this post are those of Don Hanson.